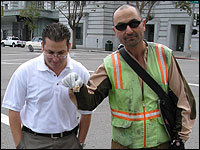 Methods utilized to get rid of pests can be scarier than the actual pests themselves.

In San Francisco, however, that’s changing. Instead of toxic sprays, one pest control company employs dogs, birth control and other innovative methods to root out pesky critters.

For the past 10 years, San Francisco has contracted Pestec to manage its spiders, cockroaches, ants and rats. This year, the company became the first-ever pest control organization to be Green Shield certified by Integrated Pest Management of North America, a nonprofit endorsing environmentally friendly pest control methods.

“If she smells a bedbug she’ll sit down to signal that to me,” says Trigeros. “And I say ‘show me’ and she’ll point with her nose where she’s smelling it from and that’s when she gets her treat for finding the bedbugs.”

Trigeros then sucks up the bugs with a high-powered vacuum while members of her team seal up electrical outlet covers and floor molding seams with white caulk.

When mosquitoes carrying the West Nile Virus threatened the city, the company refused to use the common antidote: aerial spraying of pyrethrum. Instead, Pestec hired bicycle messengers to ride around and drop packets of a biological insecticide — which acts as a sort of birth control — into the city’s 20,000 storm drains.

The company’s president, Luis Agurto says he learned just about everything he knows from his father, the founder of the company and an immigrant from Nicaragua.

“People over there depend on physical controls like hot water and the sun to destroy insects, so they move their mattresses outside so the elements can kill them on their own,” says Agurto. “So, we had the thinking if they can do it over there why can’t we do it over here?”