HomePress
How Best To Snag And Destroy Bedbugs? NPR 2019

How Best To Snag And Destroy Bedbugs? NPR 2019 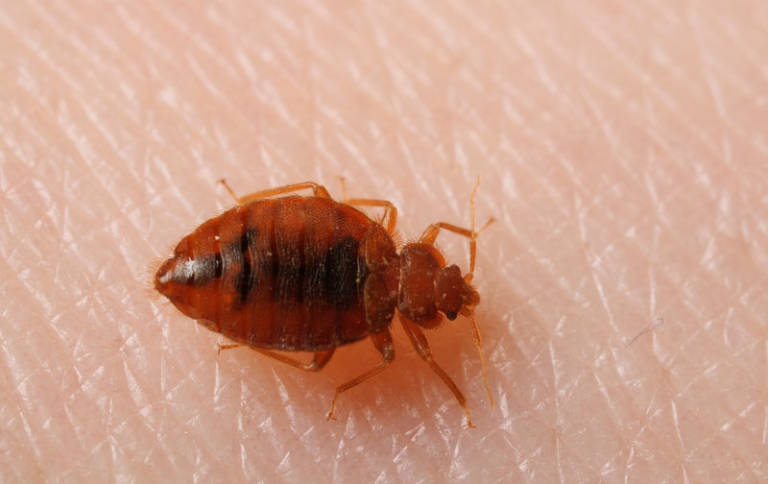 Summer is a time of travel and fun. But with every bed an exhausted traveler falls into after a day of sightseeing, the chances of bringing home an unwanted bug increase.

Bedbugs don’t fly or jump or come in from your garden. They crawl very quickly and are great at hiding in your luggage when you travel and hitching a ride into your home — or hotel room.

“It would probably be a prudent thing to do a quick bed check if you’re sleeping in a strange bed,” says Michael Potter, an entomologist at the University of Kentucky who researches bedbugs. His recommendation goes for beds in fancy hotel rooms, as well as dorms and summer camp bunk beds.

So what does Potter do when he travels? First, he keeps his suitcase zipped up and on a credenza or metal luggage rack. Bedbugs have a hard time climbing up smooth surfaces like metal.

Next, he recommends pulling back the sheet at the head of the bed and checking the seams on the top and bottom of the mattress and the box spring. Contrary to popular belief, bedbugs don’t burrow into mattresses; they stay on the surface. And after feeding on us they find a hideout, where they leave telltale brown or yellow droplets of digested blood called fecal spots. If they have already had a chance to reproduce, their nest might include translucent egg casings and young yellowish nymphs.

“They’re more of a nest-type of insect,” says Bill Donahue, an entomologist and owner of Sierra Research Laboratories in Modesto, Calif., where he evaluates treatments against bedbugs and other pests. “There are areas where the bedbugs will congregate.”

Adult bedbugs are about the size and color of an apple seed. Young bugs, called nymphs, are smaller and yellowish or white. Guided by the carbon dioxide and heat that sleeping humans emit, they crawl quickly up wooden bedposts and over sheets to stick their long mouth part in and drink for about five minutes, until they’re completely full. They then hide in a nearby cranny, like the seam of the mattress or behind a baseboard.

“Heaven forbid you wake up with itchy red welts during your stay,” Potter says. “Then you want to be incredibly vigilant when you get home.”

He suggests putting clothes in the dryer or leaving unzipped suitcases inside a hot car, since bedbugs are susceptible to high temperatures. Some people take days, even weeks, to react to a bedbug bite, so bites aren’t a great indicator of when you were exposed to them. And though some people can suffer a severe skin reaction, bedbugs aren’t known to transmit any diseases. 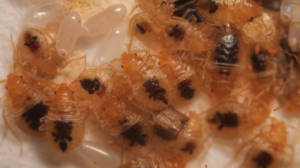 Until the 1940s, bedbugs were a common occurrence in the U.S. After being nearly eradicated by the spraying of DDT in the 1950s, they’ve made a comeback worldwide in the past 20 years, aided by the widespread movement of people. They’ve been found all around the country in settings as varied as schools, dorms, hospitals, theaters, moving vans and even funeral homes, according to Potter. And they also move around on secondhand furniture.

Apartment dwellers are more vulnerable to infestation, as bugs can crawl from one flat to another. Because bedbugs hide, they’re difficult to treat without the help of a professional, and the treatments can be expensive.

“If you think you have bedbugs, let your landlord know right away,” says entomologist Andrew Sutherland, the University of California’s urban pest management adviser for the San Francisco Bay Area. “It’s their responsibility to do inspections and to hire a reputable pest control operator to take care of the problem.”

Because bedbugs are vulnerable to heat, a thermal treatment is “the gold standard,” says Luis Agurto, CEO of Pestec, a pest control company in the San Francisco Bay Area. Pestec places big heaters throughout an infested residence and warms it up to 122 degrees Fahrenheit for two hours. Technicians armed with “guns” blow hot air into areas where bedbugs might be hiding.

After a thermal treatment, Pestec monitors for bedbugs for several weeks by placing a hard plastic cup under each bedpost. The insects have no trouble climbing up the rough outside of these so-called interceptor cups, but they get trapped by the smooth inner surface, which they’re unable to scale. The company also uses insecticides and vacuum cleaners to get rid of infestations.

Scientists are working hard to expand their eradication tool set. At the University of California, Irvine, biologist and engineer Catherine Loudon is collaborating with several engineering labs on campus to create synthetic surfaces that could better trap the bugs. She was inspired by the tiny hooked hairs that grow from the leaves of some varieties of beans, such as kidney and green beans. In nature, these spiky hairs, called trichomes, pierce the feet of the aphids and leafhoppers that like to feed on them.

Loudon got the idea from Potter, of the University of Kentucky, who mentioned to her a folk remedy he had read about. Residents of the Balkan countries used to spread bean leaves around their beds, Potter told her, and in the morning they’d find bedbugs attached to the leaves. The bugs’ feet, it turned out, were getting impaled by the hooked hairs. Researchers have found that trichomes are just as effective against bedbugs, even though they don’t feed on leaves.

Loudon’s goal is to mimic a bean leaf’s mechanism to create an inexpensive, portable trap.

“You could imagine a strip that would act as a barrier that could be placed virtually anywhere: across the portal to a room; behind the headboard; on subway seats; an airplane,” Loudon says. “They have six legs, so that’s six opportunities to get trapped.”

This post and video were produced by Deep Look, a wildlife video series from KQED and PBS Digital Studios that explores “the unseen at the very edge of our visible world.”