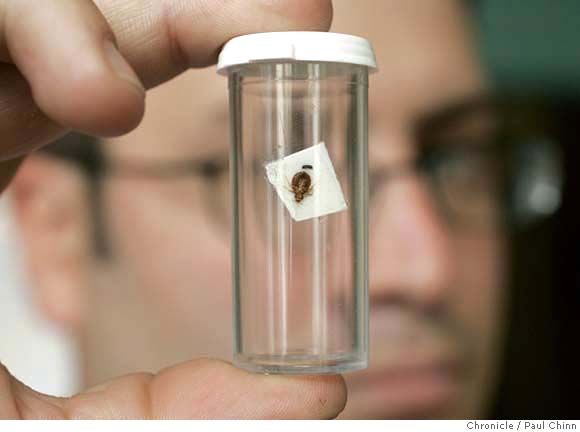 When she and her husband moved into an upscale apartment in an “emerging” neighborhood near Civic Center, Katie Beckheyer may have had some concerns about crime, gritty streets and panhandlers. But she never expected what would be the real nightmare.

“I am covered in itchy red welts,” she said in an e-mail, “and drained to the core from six months of insomnia, paranoia (I wake up every morning at 3 a.m., searching my sheets for signs of them feeding on me) and incessant itching.”

Beckheyer had their apartment sprayed six times. But they were still getting bitten, so they finally paid for one last treatment to make sure their belongings were clean, and then moved out.

Before you extend sympathetic wishes to the poor folks who are infested with bedbugs, here’s a piece of advice – better check your mattress.

Like the rest of the country, San Francisco is experiencing a bedbug boom. Dr. Johnson Ojo of the Department of Public Health said bedbugs are popping up everywhere, from “low-income housing to high-priced hotels.”

It’s an all-out war on the tiny, creepy, blood-sucking predators. And the bugs are winning.

Ojo has put together a citywide policy that covers all the basic steps: Hotel managers who learn of an infestation must immediately set up a pest-control spraying, and residents are encouraged to follow specific instruction on washing clothing and showering with hot water.

“I feel like there has not been enough research on alternative methods,” said Jeff Buckley, director of the Central City Single Room Occupancy Collaborative, which works with 5,000 to 7,000 people each year who live in supportive housing. “I know for a fact that one hotel (in the Tenderloin) has had 14 sprays in the last two months.”

That’s not necessarily because the hotel is doing a poor job of attacking the pests. Bedbugs are everywhere, particularly in supportive housing. But it is an example of the scale of the problem and how hard it is to solve. Consider, each of those 14 treatments is actually three consecutive sprayings per room, two weeks apart.

And the bedbugs keep coming back.

“In terms of nonroutine maintenance, bedbugs are at the top of our list,” said Richard Heasley, executive director of Conard House, which provides supportive housing in 525 units for clients with chronic mental illness. “It is the single most frustrating problem we have to deal with.”

If you thought bedbugs were eradicated long ago, you are not alone. Arthur Slater, an entomologist who directed UC Berkeley’s pest management program from 1973 to 2001, said he hardly gave bedbugs a thought.

“When I started in ’73, bedbugs were something your father might know about,” he said.

Slater said there are two major factors in the bedbug upsurge over the past 10 to 15 years. The first is cheaper air fares, which allow regular travel from countries where bedbugs had never been controlled. The second factor is complacency.

“We are not prepared to put out the resources to do it well,” he said.

Slater, who is now a pest-control consultant and freelance bedbug expert, is among those who think there are better treatments than spraying insecticides. He is an advocate of a treatment where large heaters are brought into a sealed room and the temperature is raised to more than 120 degrees for 24 hours. That not only kills the bedbugs but also their eggs, which are the real problem in the bugs’ rapid growth.

Ojo is willing to consider heat treatment for the city, but he points out that it is expensive and requires technical expertise.

“It is promising,” he said. “But it has never been tried on a large-scale basis.”

Well, this might be a good time to give it a try. San Francisco has been ahead of the curve on the bedbug issue, but so far that’s only meant that the city realizes what a difficult and pervasive problem it has become.

Buckley wonders if the city couldn’t persuade a researcher at one of the Bay Area’s medical facilities to do some work on alternative methods. Besides heat treatment, Slater said, there have been some promising results from the use of concentrated orange oil.

But until they can be given a try? “I’m still checking my mattress,” Buckley said.